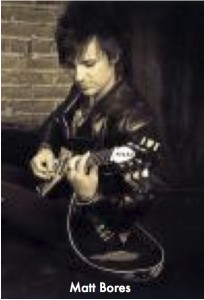 Matt is a very experienced and accomplished guitarist who excels in the genres of rock, hard rock, and blues.  He became interested in guitar at a very young age and began taking formal lessons at age 9 and continued though 16.  He went on to study guitar and music theory in college at Owens College and Terra C.C. where he played in the school’s electric music ensemble.

Matt has been playing in bands and performing live since the age of 17.  He currently plays lead guitar and sings in 2 successful bands, and has had the opportunity to play across the region sharing the stage with national acts, such as RATT, Local H,  Stabbing Westward, & Rehab.

In his twenties Matt became interested in teaching guitar and began giving private lessons to adults and children.  He has given lessons at summer camps and volunteered giving lessons and demonstrations to children with special needs.  He found it very rewarding to be able to give the gift of music through teaching guitar.

With over 20 years of experience playing guitar, a solid core knowledge of music theory and guitar fundamentals, as well as a genuine passion for music and teaching, Matt will be able to lay down the fundamentals to help any aspiring guitarist achieve their highest musical goals.