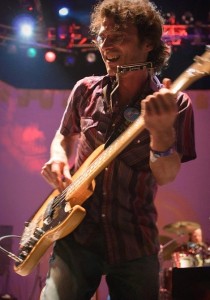 A native of Columbus, Cliff Starbuck is the youngest of a family of musicians.  He started playing the piano at an early age and later took up the bass in the elementary school orchestra.  A few years later, he picked up the electric bass and continued to indulge an insatiable appetite for string instruments, learning any one he could get his hands on.  He also played the tuba in the Upper Arlington Marching and Concert Band.

By the end of High School, Cliff played publicly with a popular local band called Supplication. When that band dissolved in 1991, he went on to help found Əkoostik Hookah, an improvisational rock band that achieved regional success, making multiple national tours of the US and abroad.  The band founded the bi-annual festival Hookahville, where they shared the stage with renowned musicians such as Willie Nelson, Bob Weir and Arlo Guthrie. They recorded six studio albums.

After 19 years, Cliff left Əkoostik Hookah and went on to pursue other musical endeavors in Columbus as well as Los Angeles, Colorado and Hawaii, intensively diversifying his skills and growing as a musician.

He is endlessly grateful for the privilege of earning a living doing what he loves the most.  He has enjoyed the ability to stay immersed in the world of music, continuing to develop as a singer, composer, arranger, student and teacher. His appetite for learning to play instruments has never diminished, with piano, bass, banjo, harmonica, cello and ukulele as enduring favorites.  He also has an open and indiscriminate approach toward all musical genres.

With decades of experience teaching and communicating about music, Cliff is an inspired teacher with infectious enthusiasm, and he is easily infected by others’ enthusiasm.  He considers the study of music limitless, and continually leads to more undiscovered pathways.